The Viking Travel Coin was designed with the traveler or wanderer in mind. Whether your journey is to the corner store, to another country, or to achieve a personal goal, a Viking Travel Coin in hand or pocket will provide comfort along the way.

On one side of the coin you will find Odin, the Norse god of war and of the dead. 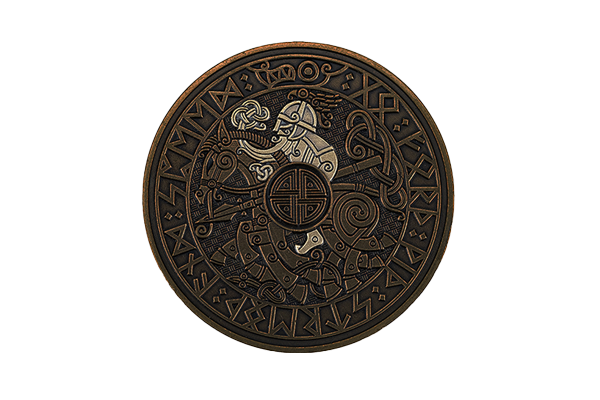 Odin - Norse God of War and of the Dead

Odin gives those in battle strength against their enemies. He is called the "Allfather" and the "Wanderer." Odin’s primary goal? To protect Midgard, the only realm visible to humans.

Odin is rarely seen without his spear, Gungnir. But Gungnir did not always belong to Odin. It was originally forged by the dwarves and stolen by a smooth-talking Loki, who gifted it to Odin. It is said that the dwarves balanced the spear so well that it could strike any target down, no matter the skill or strength of the wielder. 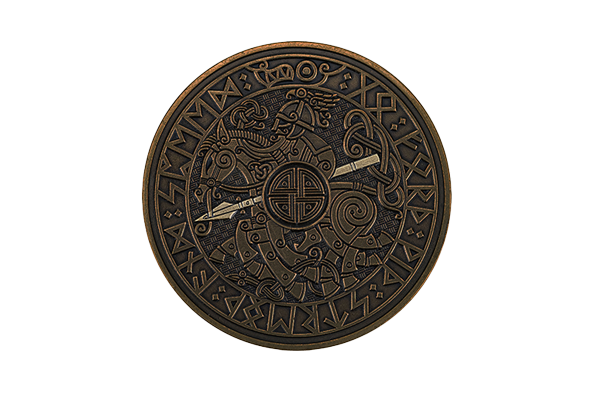 Odin sits astride his eight-legged horse, Sleipnir, that he rides to war, and on his frequent journeys throughout the Nine Worlds. Sleipnir, a son of Loki, was gifted to Odin, and is the best horse among gods and men - unmatched in strength and speed. 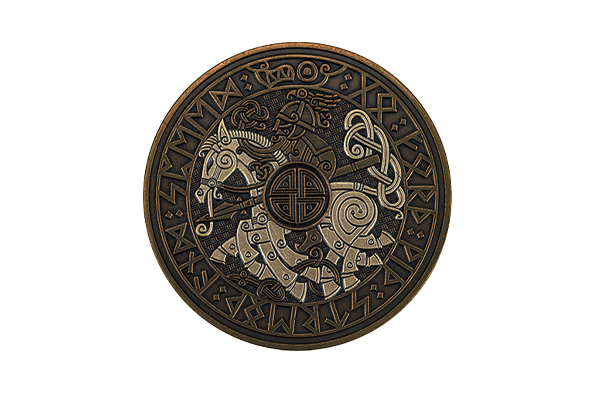 Flying above Odin is one of his raven familiars, Huginn, which represents Odin’s thoughts. His other raven, Muninn, hiding on the back of the coin, represents Odin's memory. Given the gift of speech by their master, Huginn and Muninn fly over Midgard each day to report all that they see. They know all and they see all, giving Odin the most trustworthy intelligence on his enemy’s activities. Odin fears that Huginn may not come back, yet more does he worry for Muninn's return. 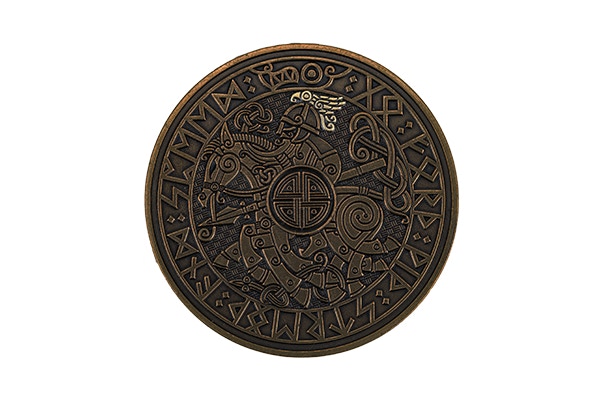 Encircling Odin and Sleipnir are Viking runes which spell out "Go forth with strength and speed." These words are meant to encourage the holder to embark on every journey with confidence and good fortune - to make sure that the journey isn’t met by unexpected blockages or delays. And if it is, the holder will have the help of Odin and his familiars. 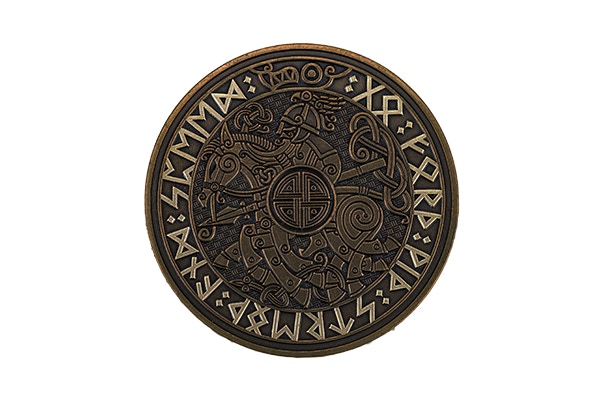 Viking Runes - "Go Forth with Strength and Speed"

Look closely among these runes and you'll find Freki, one of Odin's two wolf companions, eager to protect you from what evils may come. 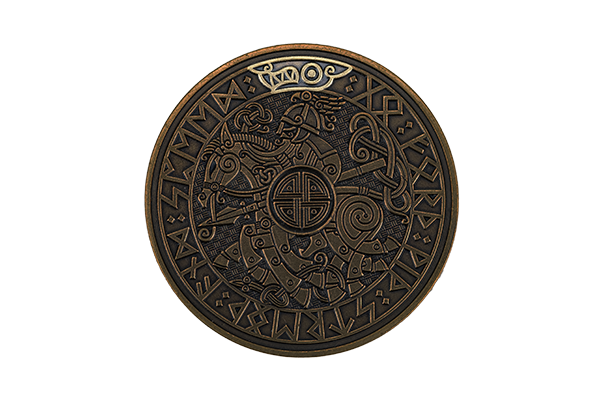 Freki - One of Odin's Wolf Companions

Odin actually has two wolves. Geri is the greedier of the two and Freki is the more ravenous. Odin only feeds them the best meat, as all he requires is wine. Geri and Freki sleep in shifts at Odin’s feet so that he is never caught off guard by an intruder. Their most important task – to protect Midgard’s border against Giants, the sworn enemy of both men and gods.

Flip your Viking Travel Coin over, and you'll see Vegvisir, a Nordic wayfinder. This magical stave helps the bearer find their way through rough weather. It's power is so great, that after carrying it for a while, you'll come to understand that there is no such thing as "bad weather," there is only weather... and you'll feel empowered to travel boldly through any weather.

Vegvisir - Nordic Wayfinder, "That Which Shows the Way"

The Viking runes surrounding Vegvisir spell out "May your path be true." These words are intended for your physical, as well as your moral and spiritual journeys through life. 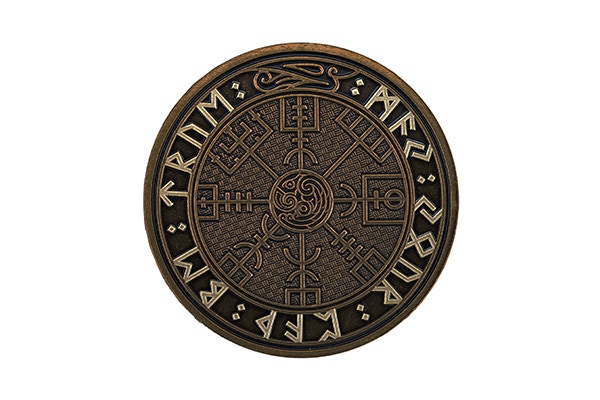 Viking Runes - "May Your Path be True"

Among these runes, you'll find Jörmungandr, the Midgard Serpent. 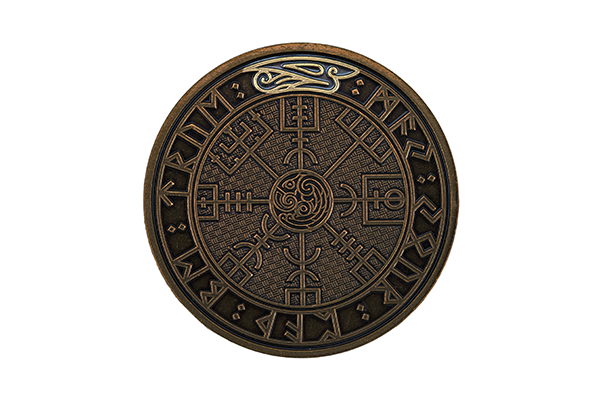 Jörmungandr is the middle child of Loki, and was thrown into the great ocean that surrounds Midgard at a young age by Odin. While in the ocean, Jörmungandr grew to an immense size, so large that he was able to surround the entirety of Midgard and grasp his own tail. Odin’s son, Thor, is the sworn enemy of Jörmungandr, and it is said that when Jörmungandr releases the hold on his tail, Ragnarok (the battle at the end of the world) will begin. Jörmungandr represents the eternal circle of life and death... no beginning and no end, with everything simply transforming into something new.

The Viking Travel Coin is for every traveler, no matter how far the journey. Regardless of the adventure, we could all use a little help from Odin and his companions - the strength and speed of Sleipnir, the protection of Freki, the omnipotence of Huginn and Muninn, and the true aim of Gungnir. There will always be a Jörmangundr threatening to unleash hell on our lives, but with this coin in hand, we can prevail. 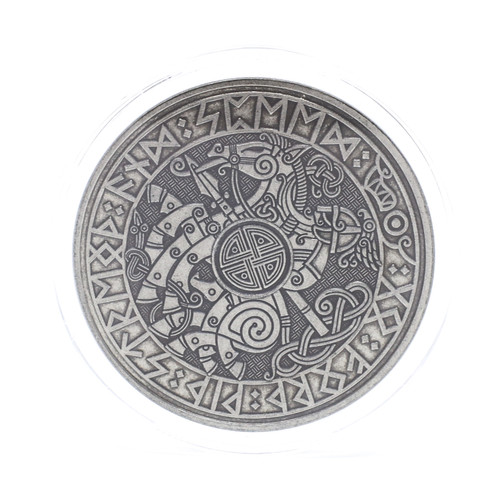