Made in Nebraska, the products included in the Genuine Ogallala Bay Rum Bonanza Cologne and Aftershave Sample Pack bring to mind the Ogallala barbershops that once catered to cowboys fresh from the trail. Each sample pack contains all five aftershaves from the manufacturer, ranging from the classic formulation to the latest Ogallala Bay Rum & Sandalwood. Other products include Bay Rum Cologne, Bay Rum Limes & Peppercorns Aftershave, and Sage & Cedar Aftershave. Purchasing this product is an excellent means of sampling a range of Ogallala Bay Rum colognes and aftershaves to see if there is one or more that are suited to your personal needs and tastes.

Genuine Ogallala Bay Rum manages to capture the old-time charm of the Bay Rum that was once so popular in Ogallala, Nebraska. However, the manufacturer is not limited to recreating those old formulas, because it has also managed to update them for modern times using ingredients that the original users could not have anticipated.

(No reviews yet) Write a Review 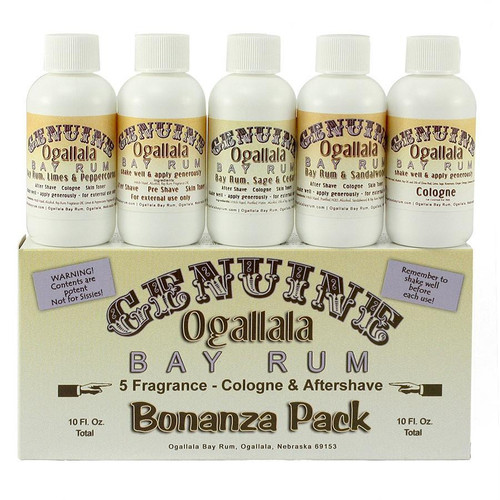