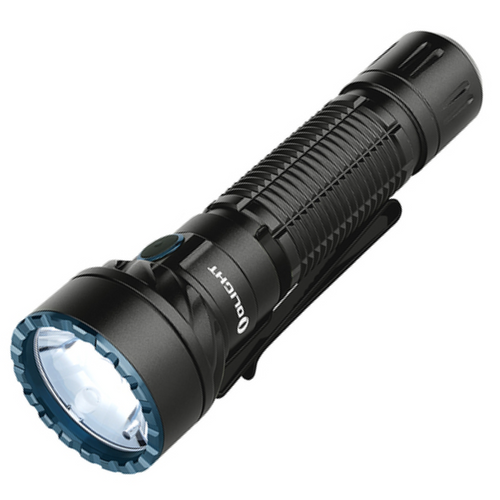 The Freyr is a dual-switch flashlight producing both white light and RGB lights. The main white light boasts a maximum output of 1,750 lumens and a beam distance of up to 360 meters. The three colored lights (red, green, blue) are helpful for night vision protection, investigation, or signaling. With a silicone traffic wand, it also can be used to direct traffic, mark a potentially dangerous area, etc. Powered by a 5000mAh rechargeable lithium-ion battery, it runs up to 15 days when using the moonlight mode. Freyr has two independent switches. You can select a colored light or moonlight easily with the side switch, or operate the white light tactically with the tail switch, which is also an interface with the magnetic charging cable. It also comes with a two-way pocket clip and a premium holster, giving you more convenience while on duty.

The Freyr delivers a max output of 1,750 lumens with its beam distance reaching 360 meters.

✔ Level up Your Beam Throw

Standing on the Shoulder of M2R Pro, the Freyr produces a bright, far-reaching whitebeam, especially useful when taking patrols.

In addition to normal white light, the Freyr also comes with RGB lights to react correctly to every situation.

✔ A Perfect Match with the included Silicone Traffic Wand

With a silicone traffic wand, the Freyr can also be used to direct traffic or as an emergency signal light.

A side switch to select a colored light on demand, and a tail switch to operate the white light tactically.

✔ Built for Longtime Use

Powered by a high-capacity 5000mAh lithium-ion battery, The Freyr features an incredibly long runtime up to 15 days.

With Olight exclusive turbine-like cooling fins, the built-in thermal, and proximity sensor, the Freyr can be always in check.

The first batch of Olantern is limited due to the complex manufacturing process. Olantern is More Than Just a Lantern Olight’s brand new Olantern will bring you unprecedented lighting...

The Freyr is a dual-switch flashlight producing both white light and RGB lights. The main white light boasts a maximum output of 1,750 lumens and a beam distance of up to 360 meters. The three...

The Swivel is a compact and foldable COB+LED work light. The COB module projects a smooth, broad beam up to 400 lumens for near-field illumination, while the LED provides a more focused and farther...

The i3T EOS Ti is a slim EDC flashlight featuring a tail switch. It is powered by a single AAA battery and delivers a max output of 180 lumens. Its excellent LED, paired with the TIR optic lens,...

The M2R Pro takes tactical flashlight to the next level. It is powerful, delivering a 1,800-lumen output and a 300-meter throw. It uses a 5000mAh 21700 rechargeable battery. It is tactical, easily...

The Baton Pro is the newest version of our portable, rechargeable side-switch LED flashlight. Powered by a single 3500mAh 18650 customized lithium rechargeable battery and a high-efficiency LED, the...

These now come with the rubber cap fix from Olight. The Warrior Mini Red is a dual-switch tactical EDC light. It can produce a beam of 190 meters and an output of 1,500 lumens despite its compact...

Get the latest updates on new products and upcoming sales